December 07, 2018
I recently received access to a new workstation built around the AMD Ryzen Threadripper 2990WX 32-Core Processor. The main use of the system will be to process genome sequencing data. It has 64 threads and the clock speed is 3.2GHz. It should get those data processing jobs done a lot quicker than my other system. Nevertheless I wanted to run some benchmarks to see how much faster it is as well as give it a stress test to see how well it can cope with high loads. This info could also be useful for comparisons in case degradation of the system in the future.

Here are the specs of the 3 systems being benchmarked:


The command being executed is a pbzip2 of a 4 GB file containing random data using some benchmarking scripts I wrote previously. Here are the data processing speeds for the three systems at different numbers of parallel threads. 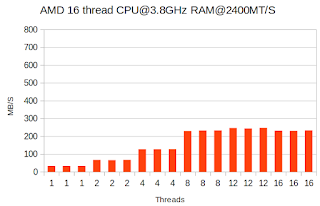 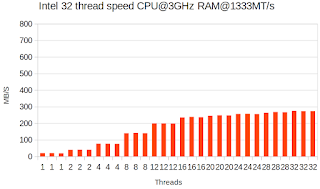 Notice that the curve flattens out after about half the cores. Not sure why this is. Both systems are reading data off the SSD and the performance is very similar after transferring to /tmp directory which is RAM. Now for the AMD64 system. 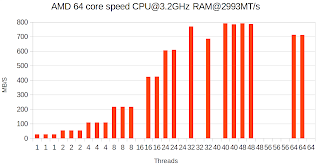 You can see in the third graph that some of the tests didn't complete. There were segfaults due to memory failures. Technical advice suggested to take the RAM speed down a notch to 2.8 GHz to reduce the power draw. The test was repeated. 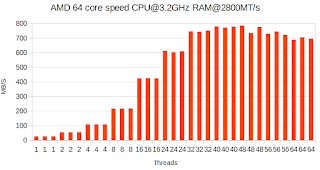 No errors here, and the performance is not really affected.

I did a stress test by leaving the machine to run at full CPU utilisation for 100 runs (approx 10 minutes) and there were 3 errors. So I reduced RAM speed further down to 2.7GHz and it passed the stress test. The power supply is 850W, perhaps 1000W would be more suitable.

In conclusion it looks like the AMD64 system will be at least twice as fast as the Intel32 system for high CPU jobs, but it does consume a lot of power. Next test will be to process some genome sequence data.