It began with announcements from Illumina of the HiSeqX10 as well as the release of the NextSeq500. Later, X-10 technology was included in V4 HiSeq2500 kits resulting in a substantial increase in sequence output from that instrument. There was also the announcement of the NeoPrep automated library preparation system that will be officially released in the 1st half of 2015. NeoPrep looks like an attempt to use microfluidics to perform generate libraries; if this is successful, it would be a major advance in reducing bottlenecks in sample preparation. Microfluidics are also able to reduce the volumes of reagents required, making the process cheaper. In addition, labour costs per library will be drastically reduced given that automation will be commonplace for routine protocols. Regarding 3rd gen platforms, we saw some mixed reviews from Oxford Nanopore MiniIon users while PacBio Sequencing long read sequencing is becoming more mainstream (including a Nature article), and we hope that a larger user base will spur on further improvements in sequencing chemistry. Could 2015 be the year that protein sequencing goes "next generation"? Time will tell, on the other hand, enhanced bioinformatic algorithms (like SWATH) in proteome mass spectrometry have some pundits already announcing that next generation proteomics is here.

I just wanted to touch on some interesting points of research that have the potential of major advances in genomics. The first is the human knockout project, that is the search for individuals that carry normally deleterious mutations but have a normal phenotype. Those individuals and the other alleles they carry could be a goldmine for drug targets. This has promoted researchers, both academic and private-sector in gold-rush like enthusiasm to search for these individuals and characterise their precious genomes. Another technology that has gained real traction was CRISPR/Cas9 genome editing, not just for in vitro applications, but also for generation of custom rodent gene edited lines and more recently showing potential in gene therapy. Some conditions that show promise include Hepatitis B virus, cardiovascular disease and muscular dystrophy. Recently, other researchers have shown promise in restoring normal genotype to mutant spermatozoa with broad applicability for families to eliminate deleterious alleles from their lineage. This holds great promise for molecular medicine and also major ethical challenges.

This year I put an emphasis on quality blog posts including in-depth series on RNA-seq analysis, benchmarking data processing and NGS aligner accuracy. The number of clicks to the blog increased significantly this year and total pageviews topped 20,000 today. I also learned that my audience is mostly USA-based, mostly uses Windows computers, and mainstream internet browsers. My post on Geneclouds was my most popular post this year with 1185 hits, most of those coming from Reddit and Twitter. I also opened a Twitter account so follow me there @mdziemann. In 2015, I will be writing on ChIP-seq, DNA methylation analysis, variant calling, science papers and user friendly tools for any and all NGS applications. 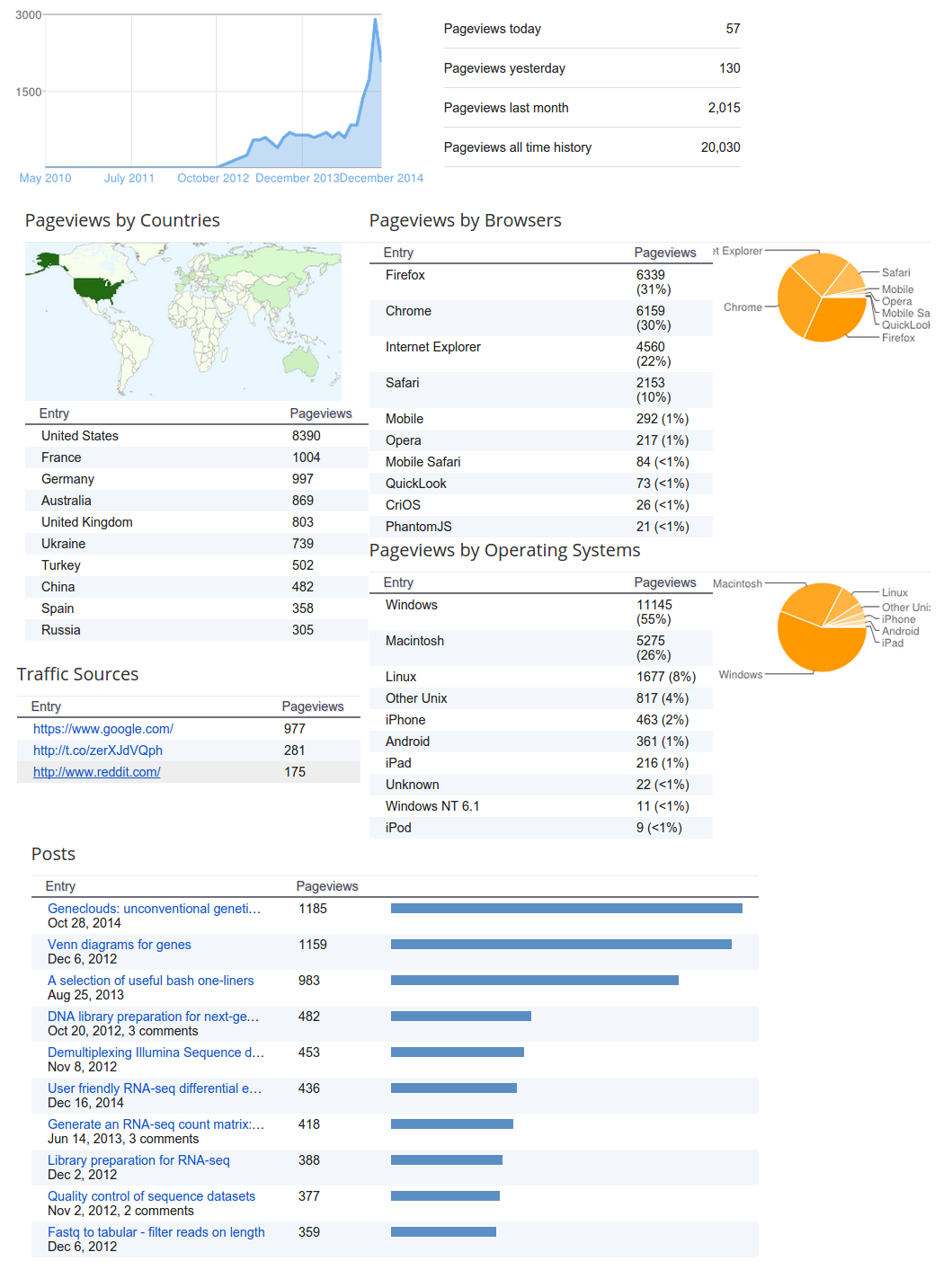 I had a good year for publications :)