April 25, 2018
We know RNA-seq has a number of advantages over array based analyses, but is RNA-seq taking over in terms of number of datasets published? I got curious and thought I'd investigate with some PubMed searches. I searched for "RNA-seq" and "microarray" and downloaded the CSV file which summarises the number of citations per year. As a type of control, I also searched "gene expression". 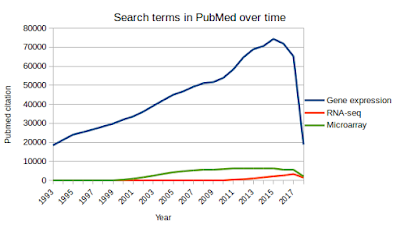 I divided the yearly "RNA-seq" and "Microarray" citation counts by the "Gene expression" counts then multiplied by 1000 to give the numbers seen below. 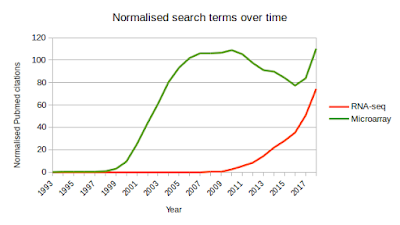 You can see that microarray is still more frequent in PubMed as compared to RNA-seq, but the gap is getting much narrower and the cross will likely occur in the next two years.

Next, I will look at the rate of GEO data deposition. (Updates soon)