Paper of the week - Cooperative epigenetic effect of TETs and OGT

December 14, 2012
There have been a number of high profile profile articles in recent times discussing the function of TET proteins, mostly in the conversion of methylated cytosine (5mC) into hydroxymethylated cytosine (5hmC), the 5th base. Hydroxymethylcytosine is much rarer than methylcytosine and is thought to be an intermediate towards demethylation of cytosine, a mechanism which remains incompletely resolved. A paper last year showed that TET proteins also convert 5hmc to 5-formylcytosine (5fC) and 5-carboxylcytosine (5caC), termed the 6th and 7th bases. 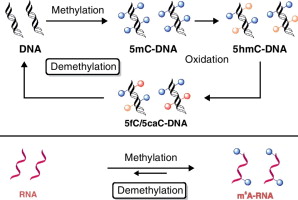 OGT on the other hand is a fairly unique protein because it is the only known known O-GlcNAc transferase in mammals. What is GlcNAc you say? It stands for N-acetylglucosamine, a hexosamine. There has been a series of papers (here, here, here) discussing OGT as a nutrient sensor, transferring GlcNAc during period of surplus nutrient supply. GlcNAc can be transferred to the same amino acids as phosphorylation, so there is a suggested crosstalk between the mechanisms (link) especially working in concert with the AMPK another sensor of cell energy supply (link). The reason that I'm going into this is because elevated GlcNAc has been linked to insulin resistance, a state of pre-diabetes - as has AMPK.

New data presented by Chen et al in Nature radically alter the assumed function of OGT, showing that it associates with TET2 and TET3 on the CpG island-containing promoters of genes. It appears that without TET proteins, OGT can't localise to the chromatin and modify histones (H2S112). Histone GlcNAc has previously been characterised as an activating histone mark, but this may partially be due to the cooperative effect of TET proteins performing modifications to methylcytosine. The data generated in this study was generate from mouse embyonic stem cells, but we think that the role of OGT on the chromatin could be important in the control of gene expression in the onset of pre-
diabetes.

Abstract
Ten eleven translocation (TET) enzymes, including TET1, TET2 and TET3, convert 5-methylcytosine to 5-hydroxymethylcytosine and regulate gene transcription. However, the molecular mechanism by which TET family enzymes regulate gene transcription remains elusive. Using protein affinity purification, here we search for functional partners of TET proteins, and find that TET2 and TET3 associate with O-linked β-N-acetylglucosamine (O-GlcNAc) transferase (OGT), an enzyme that by itself catalyses the addition of O-GlcNAc onto serine and threonine residues (O-GlcNAcylation) in vivo. TET2 directly interacts with OGT, which is important for the chromatin association of OGT in vivo. Although this specific interaction does not regulate the enzymatic activity of TET2, it facilitates OGT-dependent histone O-GlcNAcylation. Moreover, OGT associates with TET2 at transcription start sites. Downregulation of TET2 reduces the amount of histone 2B Ser 112 GlcNAc marks in vivo, which are associated with gene transcription regulation. Taken together, these results reveal a TET2-dependent O-GlcNAcylation of chromatin. The double epigenetic modifications on both DNA and histones by TET2 and OGT coordinate together for the regulation of gene transcription.
PMID: 23222540 [PubMed - as supplied by publisher]
Diabetes DNA methylation Epigenetics Histone mods Recent articles
Location: St Kilda VIC 3182